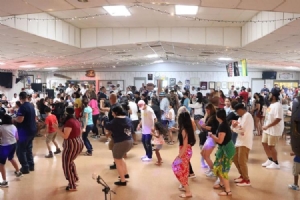 When Anitra Santos Rivera arrived in Houston, Texas in 2014, she wondered why no one had ever hosted a Guam Liberation Day event.

Growing up on Guam, she always looked forward to Liberation festivities every July.

"We heard about San Antonio, Killeen, but none in Houston,” she said. "So, a few of our friends decided, ‘What the heck? Let’s have a BBQ.’ We put it out on social media, had two weeks to plan it and ended up with 150 attendees.”

"We had people from all over coming to our Liberation. They came from California, Washington, Hawaii, Florida, Georgia, Mississippi, Kansas, Louisiana and all over Texas,” Rivera said. "We were warned after the third year of having successful Liberation festivities, that it was only going to grow bigger. With the 75th Liberation, we had a huge turnout, of over 1,500 people.”

The annual Houston event always kicks off Liberation festivities for Texas with Killeen or Dallas having an event a week later and San Antonio rounding out the annual celebration with a Liberation finale.

Rivera said the event takes months to plan, from finding the perfect venue, guessing the number of people that will show up, making sure there’s enough food, fundraising efforts, finding entertainers and getting small businesses (with mostly Guam-themed items) to participate.

Dozens of vendors attended the event showcasing Guam favorites like dinanche and rosketti, while others showcased shirts and jewelry giving attendees a little taste of home.

"Planning something this big doesn’t just require a good team. It requires a team with the same vision, a team whose hearts are in the right place. A team who truly understands why we do this. It’s to honor the families who have endured so much pain, have gone through extremes, and have sacrificed everything including their way of life. We are here today because of those sacrifices,” she stated. "A team who knows that all of the glory goes to God. And in Houston, we are that team!”

While the group normally waits for the theme of the annual liberation on Guam, this year they created their own - Alone we are resilient. Together we are islanders.

They were shocked with the turnout since the group only expected about 40 to 50 people to show up.

"The feedback we get from people who attend is that the dynamics in Houston is different. I am really just grateful that the cities in Texas don’t try to compete with each other. I love that we lift each other up and help each other out because in Texas, unity is important. I believe that Texas as a whole has shown just that,” she stated.